The CAL FIRE Riverside Unit operates a joint Air Attack/Helitack base at the Hemet Ryan Airport.

HRAAB is statistically one of the most active air attack bases in the nation. The fleet consists of:

The Air Tactical Group Supervisor coordinates with airtanker and helicopter personnel to manage critical areas of the fire for crew deployment, and retardant and water drops.

The retardant used to slow or retard the spread of a fire is a slurry mix consisting of a chemical salt compound, water, clay or gum as a thickening agent. At nine pounds per gallon an S-2T can carry 10,800 pounds of this mixture For more information on Air Operations, click the links at the right.

​CAL Fire uses resources on the ground and in the air to effectively fight wildland fires. Fixed wing aircraft are used for Air Attack Operations.

The Incident Commander (IC) operates on the ground in the vicinity of the fire. The IC is the overall commander of the fire. He coordinates all the resources needed to fight the fire.

​HRAAB uses Air Attack 310 to provide an overall aerial view of the fire for the IC. Air Attack 310 coordinates the airspace over the fire directing air tanker and helicopter water drops where they are required.

Acquired by CAL FIRE
In 1993, CAL FIRE acquired 15 OV-10As from the Department of Defense. They have been converted for use as air attack planes. The OV-10As are replacing the

Cessna O-2As that CAL FIRE had been using as the air attack platform. The OV-10As are newer, larger, and faster, providing a larger field of vision for the crew and are more maneuverable than the older O-2As.

Mission
CAL FIRE utilizes the OV-10As as "command and control" of aircraft on wildland fires. The crew provides tactical coordination with the Incident Commander on the ground, providing information on the movement and spread of the fire. The OV-10A crew then directs CAL FIRE's air tanker and helicopter pilots on where to make their retardant and water drops.

Acquired by CAL FIRE
In 1996, CAL FIRE acquired 26 S-2E/G planes from the Department of Defense. CAL FIRE converted the planes to a fire-fighting configuration and fitting them with modern, powerful turboprop engines. 12 S-2Ts were ready for the 2001 Fire Season. The completely reconditioned S-2Ts are faster, safer, more maneuverable and carry a larger retardant payload than the S-2A air tanker CAL FIRE has utilized since the 1970's. The S-2T air tanker is part of CAL FIRE's air program modernization efforts that will result in the safest and efficient mix of aircraft to carry out the fire fighting mission.

A combination of S-2Ts and S-2As will be used by CAL FIRE in the next few years until a total of 23 S-2Ts replace all of the older S-2As. 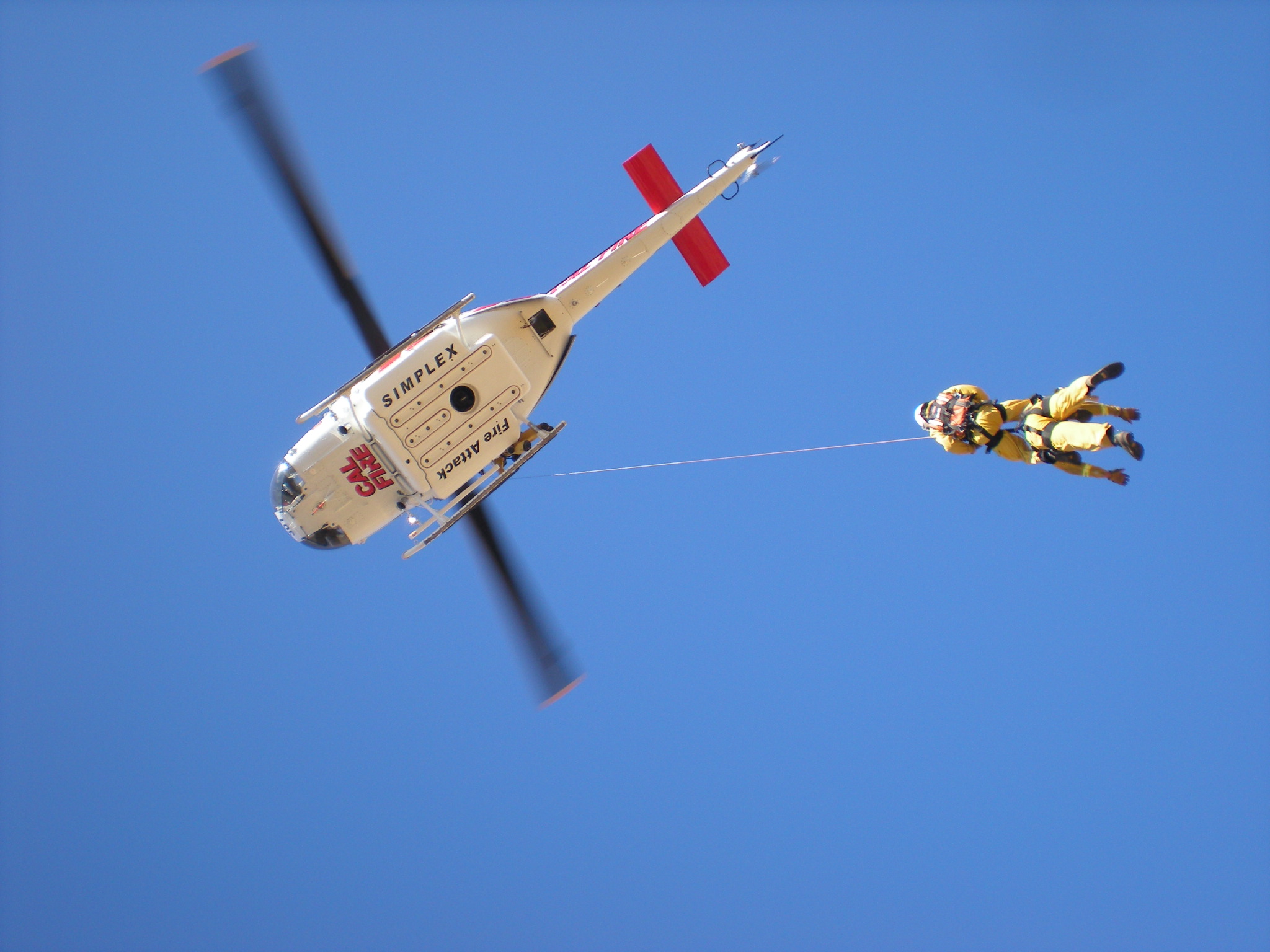 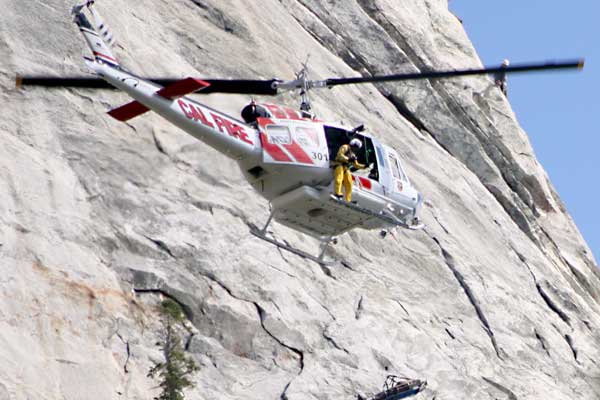 The Air Rescue Program began in 2005 at HRAAB. In close cooperation with the Riverside County Fire Department, a Goodrich Internal Hoist was purchased for Copter 301. Prior to this, all technical rescues involved the use of a technique known as 'Short Haul'. This required attaching a patient to the end of a rope and flying that patient below the aircraft to a safe location. The rescue hoist allows the rescuers and patients to be easily retrieved into the cabin for speedy transport to advanced medical care.

The rescue hoist has the capability to lift 600 pounds on a 250 foot long steel cable. ince this was the first hoist used on a CAL FIRE aircraft, HRAAB personnel had to develop a training and operations plan that could be used as a model for the rest of the CAL FIRE fleet of helicopters.

To date, Copter 301 and crews have flown hundreds of rescue missions involving the use of the rescue hoist, on both fire and civilian personnel in Riverside and surrounding counties.

Original Owner
U.S. Army, 1963 to 1975. The UH-1H was used as a troop and cargo transport and specialized operations.

Acquiried by CAL FIRE
In 1981, CAL FIRE originally acquired 12 helicopters from the Department of Defense. They were heavily modified by CAL FIRE for firefighting use, and went into service in 1989.

Mission
CAL FIRE utilizes the Super Hueys for fast initial-attack on wildland fires. The copters are able to quickly deliver a nine person fire cerew wherever needed, as well as battle fires with water and/or foam drops.

Helicopters are also used for:

CAL FIRE helicopter crews are trained for "short haul" rescues. A short haul rescue involves a crew ember being lowered from a hovering helicopter to an injured, or trapped person below. Once hooked to a harness or stokes basket, the victim and crew member are then carried a short distance to safety. For more information on short haul rescues, click the link to the right of the page.

For over 50 years, Ryan Air Attack Base has played a vital role in wildland fire suppression efforts in Southern California and Riverside County.

Hemet Ryan Air Attack Base (HRAAB) is named after the late Claude T. Ryan, who is most famous for having designed the spirit of St. Louis airplane, and who began the Ryan School of Aeronautics in Hemet during World War II. Through a contract with the Federal Government 14,000 cadets were trained to fly. With the end of World War II and the need for pilots diminishing, training ceased. The facility eventually became a public airport owned and operated by Riverside County.

In 1957 the United States Forest Service commenced airtanker loading operations, and in 1959 the California Department of Forestry (now CAL FIRE) began their operation at Hemet Ryan field. Both agencies maintained separate parking, loading, and mixing areas. However the initial stages of a joint base operation had begun. In 1969 the United States Forest Service (USFS) and the California Department of Forestry (CDF) truly merged into a joint agency air attack base sharing the base operation, responsibilities and facilities. The joint base concept successfully continued operation until 1998 when the USFS moved their airtanker base operation to the larger and recently vacated Norton Air Force Base in San Bernardino.

From the beginning of Hemet Ryan Air Attack base, CAL FIRE and the USFS used privately owned and contracted World War II vintage aircraft. The type and sizes of aircraft varied based on the vendor, availability of flyable airframes, and spare parts. As the years counted off and the flight hours increased, these airplanes became static museum displays, or were robbed for parts to keep the dwindling fleet flying. Because of te dwindling air tanker fleet, CAL FIRE aquired excess U.S. Navy Grumman S-2A submarine hunting aircraft. These planes were converted from military use to firefighting aircraft, using a design developed by Hemet Valley Flying Service. The first two aircraft build-ups were completed by Hemet Valley Flying Service and tested by Hemet Ryan Air Attack Base. The basic aircraft design has been in continuous service since 1975.

(Pictured: An air tanker arked in front of the HRAAB tower in the early 1980's.)

Hemet Ryan Air Attack base is one of 19 tanker bases strategically located throughout California, based on climate, fuels, geography, and fire occurrence. The base provides initial attack aircraft service to over 17,000 square miles of private, state, and federally owned lands. Up until 1998, HRAAB was statistically the busiest air tanker base in the United States. Delivering an average of 1.5 million gallons of retardant annually. With the USFS moving to San Bernardino, these statistics have dropped.

In 1977 CAL FIRE began a two-week pilot helitack program utilizing a contracted helicopter. Headed up by Captain Emil Derdowski and two Firefighters, the program was extended to a total of four weeks. The success of this pilot program gave birth to Hemet Ryan Helitack Base, using a full time contract helicopter staffed with three Captains and nine Firefghters operating out of HRAAB.

In 1981, CAL FIRE acquired Bell UH-1F Huey helicopters through the Federal Excess Property Program (FEPP), and leased them from the U.S. Air Force through the USFS for one dollar a year. This program now allowed CAL FIRE to operate and manage its own fleet of fixed wing and rotor wing aircraft. In 1992 CAL FIRE aquired several of the larger Bell UH-IH helicopters through FEPP, with Hemet Ryan Helitack (stationed at RAAB) receiving one of the first buildups. These helicopters were further upgraded with larger engines, main rotor, and tail boom assemblies, making them the "Super Huey" model. CAL FIRE now has eleven of these helicopters in service, with nine based throughout the state.

In 1993, the OV-10 replaced the older Cessna 337 as Air Attack 310 based at RAAB. In June of 2001, CAL FIRE replaced the older S-2A's at RAAB with Tanker 72 and Tanker 73, both new S-2G Grumman models. The upgrades include constant flow 1,200 gallon tanks, and turbine engines, allowing for better capabilities and performance.

If you are interested in a tour of the facility, or a formal presentation of CAL Fire Air Operations for your civic group, club, or school, please contact Hemet Ryan Air Attack Base at (951) 652-2066 during normal business hours. You may also email HRAAB at: RRU.RyanAirAttack@fire.ca.gov