Fire crews are the infantry of any fire department. CAL FIRE relies heavily on fire crews as one of the three types of ground attack resources used for wildland fires. The other two types of ground resources are engines and dozers. Fire crews work where other mechanized equipment such as engines and dozers do not easily work and also work directly with engines and dozers supporting their actions. Crews build fire line in support of containment efforts at wildland fires. Fire crews also assist at search and rescue, technical rescues including urban search and rescue and at other non-wildland type emergencies. When not fighting fire, fire crews do work projects in support of CAL FIRE's Fire Plan to reduce fuel accumulations throughout the state and also perform conservation and general work projects for other agencies.

Each crew is commanded by a Fire Crew Captain and is separated into functional work groups using the, “Rule of Fours.” The Rule provides that each crew should have at least four cutters, four grubbers and four scrapers. If the crew has more than twelve assigned firefighters, the crew captain may assign additional grubbers, scrapers or “hot shovels” (hot spotting or dirt throwing shovel firefighters). A chain saw team includes the sawyer and the puller who pulls cut vegetation out of the way of the sawyer and casts it aside often to the unburned side of the fire line. The saw teams are followed by the grubbers who loosen the fuel for the scrapers. Some fire crews assign a “drag broom” which is a firefighter with a large, stiff straw broom who actually sweeps the line to mineral soil clean of vegetation and duff. The entire line-up of firefighters is called the “hook line” after the original fire crews who used brush hook tools before the invention of the chain saw. Consequently, the lead sawyer is still called the “Lead Hook.”

Fire crews work both direct (on the fire edge) and indirect (away from the fire’s edge) fire assignments. Indirect assignments are the most dangerous since it is more difficult to get into the burn or the black when working indirect.

A fire line is generally 1.5 times as wide as the fuel is high. If the crew is working in 4’ foot high brush, the fire line will probably be about 6’ wide. In that six foot width will be the canopy cut which is the entire width of the line through the brush. The scrape or part cleaned to mineral soil will not always be as wide as the canopy cut.

Fire crews are very adept at hot line fire fighting. In that mode, the fire crew will anchor from some favorable point from which the fire cannot fish hook behind them and begin rapidly cutting a narrow fire line (scratch line) to attempt to pinch off the head of the fire before it develops a strong head of steam.

Incident commanders or “fire bosses” as they were then called, soon realized how valuable fire crews could be to the total wildland fire suppression chore. Today, there are 33 partner camps with CDC, three of them are within Riverside County.

In the early seventies, Governor Ronald Reagan instituted the California Ecology Corps. The Corps were an alternative for young men who were conscientious objectors. The CDF-Ecology Corps program lasted from 1973 through 1977. Governor Edmund G. Brown, Jr. eliminated the Ecology Corps replacing it with the CCC, California ’s new version of the earlier federal Civilian Conservation Corps. CCC Corpsmember Firefighters are free, non-incarcerated members. At its peak in the seventies, there were eight CDF-CCC Fire Centers. Today, there are two fire centers, Butte and La Cima.

CDF reached a peak of 245 fire crews during the late eighties. Budget cuts reduced the number of crews to today’s total of 197 crews assigned to 41 camps. During serious fire sieges, 170 to 175 fire crews are committed to major fires leaving only about 20 crews available for new incidents.

The late eighties saw the assignment of women inmates and wards to fire crews. Currently, the Puerta La Cruz and Rainbow Camps in San Diego County and the Ventura Camp (CYA) have women crew firefighters. Women fire crew firefighters have proven their effectiveness in working equally well with male crews.

CAL FIRE, formerly known as the California Department of Forestry and Fire Protection (CDF), fire crew firefighters must take and pass a rigorous physical fitness and fire training program before assignment to a fire crew. The fire crew training course lasts for 64-hours and is strongly task or performance oriented. Components of the training class include orientation to wildland fire, fire behavior, working with hand and power tools, fire line construction, working as teammates on a fire crew and working with engine and dozer companies.

CAL FIRE crews travel to fires and projects in crew transport trucks. The trucks have a box type build-up or rear crew compartment. The rear crew compartment seats 17 firefighters for a total of carrying capacity of one captain and 18 crew firefighters. Soon, all crew transports will be equipped with red lights and sirens to better facilitate fire crew response particularly in urban areas.

Fire crews carry the same hand tools for fire fighting as does any other fire crew. Primary fire tools include the chain saw and specific hand tools including the axe, Pulaski Fire Tool (named after the famous USFS Ranger Ed Pulaski who held dozens of firefighters in a cave saving their lives at a fire in the early 1900’s), the McLeod Tool and the shovel. Tools are separated into cutting, grubbing and scraping categories. 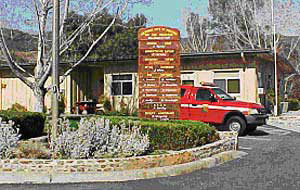 Bautista Conservation Camp is an institutional based camp located in the San Jacinto Mountain area of Riverside County. Bautista is a 120-man camp with six fire crews. The crews, along with emergency incidents work on projects for the CAL Fire/Riverside County Fire Department, the United Stated Forest Service, Valley Wide Parks and Recreation District, and the Metropolitan Water District. 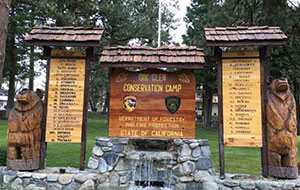 Oak Glen Conservation Camp is located at the northern border of Riverside County within the San Bernardino National Forest. Southern California’s San Gorgonio Mountain Range provides forest cover to the nearly 40 acre facility. Constructed with the capacity of 160 inmate firefighters, this camp is the largest state facility of its kind, operating 7 Fire Crews. Established in 1949, the camp has since been providing inmate labor including vegetation management, community projects, facilities maintenance, and comprehensive fire protection, suppression and rehabilitation to Federal, State and Local lands within both San Bernardino and Riverside counties. Oak Glen Crews respond to incidents across California such as; wildfires, floods, search and rescue operations and earthquakes. Oak Glen Camp’s facilities also provide shelter and subsistence for crews traveling to Southern California from other areas. The team on site is a partnership of eighteen CALFIRE employees as well as fifteen Department of Corrections employees, working together, to provide excellent service to its sponsors and the community. 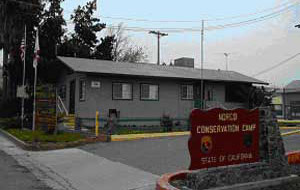 Norco Conservation Camp is an institution-based camp working in cooperation with the California Rehabilitation Center (CRC) located at 5th Street and Western avenue in Norco. The camp was opened November 6, 1972. With 4 fire crews, it is utilized for emergency responses statewide but primarily responds in western Riverside County and Orange County. Inmates receive fire training at Norco Camp and are then assigned directly to Norco Fire Crews. In addition to maintenance along the Lake Matthews shoreline and surrounding wildlife these reserve crews support other community projects. Norco Camp operates a Riverside County Fire Department 'Sonoma Kitchen' on major incidents within Riverside County. The Camp also manages an engraving shop that provides numerous products including nametags and ADA signage on a statewide basis.